It has been a long time, but the Appropriations Committee has finally got its mojo back. 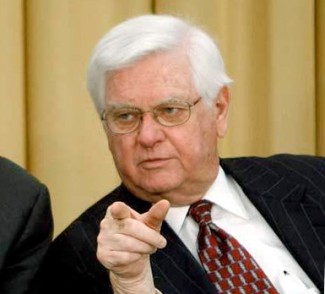 And Hal Rogers, the first term Chairman of the once powerful and feared Committee, is the chief reason why.

The House completed work on all of its appropriations work for the first time in years, and that was chiefly because of the quiet persistence of Chairman Rogers.

The Appropriations committee’s work can be mind numbing.  When I worked fo House Minority Leader Bob Michel, I used to have to sit on the House floor when the Subcommittees be grinding through their schedule in the dog days of summer, churning through amendments and fighting over obscure funding projects.   Some of the disputes seemed pretty insignificant to a young staffer like me.

Of course, to the folks who cared deeply about those issues didn’t think they were insignificant.  To them, they were life and death issues.

Woodrow Wilson once said that to watch the House of Representatives work, you needed to watch the committees at work.  Actually, if you want to see the real work of Congress, you have to watch to Appropriations Committee.  Because the work of Congress is, at its heart, all about spending the money donated by the taxpayers.

The Appropriations Committee has gone through an interesting history.

Appropriators, in the old days (before even I got there), used to be spending cutters.  They would take a real hard look at each spending request and make the requesters really work hard to justify the expense.

But over the years, the Appropriators became more lax in their requirements.  Soon, it became common practice to try to stuff as much money in the spending committees as possible.  Pork was divied up between the Minority and Majority sides, with the Chairmen getting a bigger piece of the pie.

This alienated the leadership, who wanted their own, even bigger pieces of the pie.  Leaders (on both sides of the aisle) would demand that the Appropriators take care of projects for other members not on the Committee, because the leaders made deals to get votes on other, unrelated issues.

This all came to a head when a series of scandals broke out.  Duke Cunningham, an appropriator and a member of the Intelligence Committee, used appropriations projects to make money for himself.   He would sell projects off to the highest bidder and pocket the cash.

Those scandals led to an overall disgust with the Appropriations process and the Committee.  The life blood of committee work – the earmark – was banned.  Earmarks are Congress’s only real way to direct the Administration on how to spend the money.  Without earmarks, the power of the Committee is greatly diminished.  But that didn't matter to the members or the voters.  Disgusted with the corruption and the unnecessary spending, earmarks were thrown overboard, and with them, all of the prestige of serving on the Committee.

Soon, it became more of a chore to be on the Appropriations Committee than a blessing.  The leadership, which for years did its level-best to bring the Committee to its knees, now couldn’t find anybody to serve on it.

It used to be the case that you couldn't get a seat on the Committee until your third term.  Now, freshmen were being begged to be on it.

The budget situation made the Committee’s even harder.  Discretionary spending is being crowded out by the untamed growth of entitlement spending.  As part of the debt limit negotiations, the Committee now has a flat budget for the next decade.  That means that Appropriators are going to have to spend the vast majority of time saying no.  No to this project.  No to that project.

It is no fun to be the no “guy”, especially if you are a politician.  And many of these members, who can longer do earmarks, have a difficult time finding ways to raise money, the life-blood of any politician’s campaign.

Into this situation walked Hal Rogers.  Rogers is a no-nonsense guy.  He isn’t much of rhetorician, but he is a consummate professional when it comes to producing product.  When John Boehner appointed Rogers as Chairman, King Hal promised to cut spending.  And he did.  A lot of spending.  $93 billion worth of spending, if you compare it to the last year when Democrats ran the place.

Rogers did this despite a Tea Party faction that believed that anything short of a trillion dollar cut wasn’t enough and a Democratic party that thought cutting one dime was a disaster.  Hard to pass Appropriations bills while threading that needle.

But threading a needle is exactly what Hal Rogers and his Appropriations Committee did.  Rogers won’t be making any headlines tomorrow, but he still deserves a hearty congratulations.  It ain’t easy getting your work done in a town that prefers loud screaming to quiet progress.  But King Hal did exactly that.

The Appropriations Committee needed a leader who could deliver.  They got one, by the name of Hal Rogers.