Immigration Reform Without the Police State 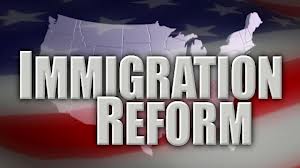 I am in favor of comprehensive immigration reform that tightens the border, legalizes the status of the 11 million immigrants who live in society's shadows now, provides a fair pathway to folks who want to be citizens in this country, and provides both tools and incentives to businesses so that they don’t hire people who are here illegally in the future.

But I am opposed to turning this country into a police state.

That’s why I was concerned about a story I read in the Washington Post this morning.  The story read:  “The Department of Homeland Security wants a private company to provide a national license-plate tracking system that would give the agency access to vast amounts of information from commercial and law enforcement tag readers, according to a government proposal that does not specify what privacy safeguards would be put in place.  The national license-plate recognition database, which would draw data from readers that scan the tags of every vehicle crossing their paths, would help catch fugitive illegal immigrants, according to a DHS solicitation. But the database could easily contain more than 1 billion records and could be shared with other law enforcement agencies, raising concerns that the movements of ordinary citizens who are under no criminal suspicion could be scrutinized.”

In the name of catching illegal immigrants, it seems that the Federal government (and many politicians) want to rapidly and exponentially expand its size, scope and power.

I would rather have a few illegal aliens working on construction sites or as bar-backs than having the Department of Homeland Security monitoring my every move.

The Post story actually makes me a bit sick to my stomach.

But politicians who may have some concerns about what the DHS is doing in this one event are proposing to do other things in a comprehensive immigration reform bill that should make all of us nervous.

They are proposing to expand the power of the Border Patrol, an army/police force that basically has authority to do whatever it wants to do from the actual border up to 100 miles into America’s interior, without regard to the Constitution.  That basically covers the entire State of Florida.  These Constitution-free zones are supposed to give the CBP the ability to better track illegal immigrants, but the fact is that often times, when given that power, they end up trampling on the Constitutional rights of American citizens.

Another provision aimed at giving the government more power to ostensibly track illegal immigrants is the expanded use of drones.  But drones can’t check the papers of a guy walking down the street.  They can’t tell from the air whether a person is an illegal immigrant or just a guy minding his own business on a morning jog.  Rand Paul filibustered against the use of military drone to kill American citizens.  But what about drones that just keep an eye on American citizens?  That too makes me nervous.  Why would Republicans give so much power to a Federal government that is widely distrusted by the conservative base?

I am not one of those black-helicopter-type of paranoids who think that the government is monitoring every email that I send.  Everybody knows that Google is doing that on behalf of the government (just joking).  (Google is doing that so it can make a lot of money.   But I have enough skepticism about those who work in the United States government (or any government, for that matter) to know that limited government should mean limited government, and not a government that tracks every movement, every transaction, and every utterance made by its citizens in the name of catching a few law-breakers.

Freedom shouldn’t just be a catch-phrase.