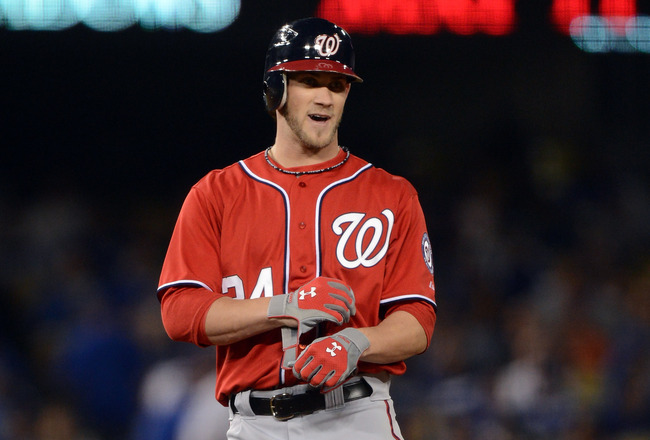 Instead of tuning in to President Obama’s speech to the nation, I watched the Nationals Bryce Harper swing for the fences at the ballpark last night.

Unfortunately for Harper (and for Nationals fans), he took the collar against the Arizona Diamondbacks, whiffing his first at-bat with three mighty swings that looked like he was trying to prove something.

I am not sure that is the case, but you have to admire the President for swinging hard at all the pitches coming his way.  He is swinging especially hard at the idea that he deserves all the credit for killing Osama Bin Laden.  I don’t think he does, but his campaign is leaving no room for doubt.  The bumper sticker reads:  Obama killed Osama and don’t you forget it.

For a White House that initially walked away from the phrase “War on Terror”, this group is getting awfully bellicose.  For example, they certainly don’t have any reservations about using the phrase “War on Women”, to score political points against Republicans.

Of course, there is one key difference between the “war on terror” and the “war on women”.  The war on terror is an actual war, with real shooting, real bombing, real maiming and real killing.  The war on women is a wholly made up contrivance of the Democratic Party, aiming to needlessly divide groups of people in the hope of exploiting the gender gap.

The President may or may not be trying to spike the football, which of course is a time-honored tradition in the NFL.   I think it was Emmett Smith, the former Dallas Cowboy superstar who said that he never spiked the football because he wanted people to know that he belonged in the end zone.  Excessive celebration for Smith was an admission that achieving success was a surprise.

Had Obama gone to Afghanistan to merely celebrate the death of Osama Bin Laden, he could have definitely been accused of excessive celebration.  But he actually went there to sign an agreement with an instable Afghan government, promising that we will hang around Kabul for at least another decade.

The Taliban liked this announcement that they launch a series of attacks only hours after Obama left.  But I guess that is neither here or there.  The bigger question is why?  Why are we committing to stick around for another decade?

Joe Scarborough, who has become America’s biggest Afghan skeptic, was so agonized by this decision that he penned an op-ed condemning in Politico.

And Scarborough is asking all of the right questions.  What do we get out of this?  What is the real cost in blood and treasure?  And aren’t we destined to fail, given the historic experiences of Russia and Great Britain in Afghanistan?

But conservatives are split on these questions.  John McCain and Lindsey Graham both believe strongly that we ought to stay until the Afghan government is strong enough to govern without us.  And I suppose keeping Afghanistan stable is in America’s long-term strategic interests.

One part of this agreement gives me pause however.  Obama says that we won’t be establishing our own permanent bases there, and that American forces will be staying on Afghan bases.   That seems awfully dangerous to me and counterproductive.

Why shouldn’t our guys have own bases there, if we are going to stay for the long-run.  We have had our own bases in Germany and Japan for decades, and that seems to have worked pretty well.

Interestingly, many of those German bases are now finally closing down, thanks to Pentagon budget cuts.  In essence, we are moving our troops from the comfort of Deutschland to the discomfort of some Afghan base outside of Kabul.   What a bummer for our troops.

I am not necessarily opposed to our continued presence in Afghanistan as long as our objectives are clear and our ability to fight the bad guys in not unduly hampered by Afghani politicians.  But I have some real questions about how this is going to really work out over the next two years, let alone ten years.

Mitt Romney has been strategically vague on what we should be doing in Afghanistan and for good reason.  Continuing the war is not a winner with the American people, who tell pollsters at almost a drop a hate that they are sick and tired of this conflict and they want to bring our troops home yesterday.

The President may think he hit a home-run last night with his speech in Afghanistan on the anniversary of the death of Osama Bin Laden.  I think he hit a foul ball.