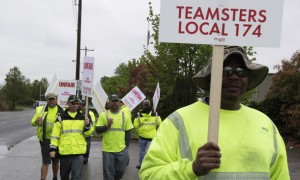 Scott Walker, Wisconsin’s new Republican Governor, is but the first of the new crop of GOP governors to aggressively follow in the footsteps of New Jersey Governor Chris Christie and take on the public sector employee unions.

It is a risky strategy.   Wisconsin, after all, is not Alabama.  It is the home of the Green Bay Packers (meat packers are heavily unionized) and the Milwaukee Brewers (as are beer brewers), and it has long dabbled on the more progressive side of the ideological spectrum.

Wisconsin is a Catholic state, and it has an affinity for union members.

For Walker, and for John Kasich, who is about ready to embark on the same journey in Ohio, they have to tread a fine line of drawing a line in the sand against the union leadership, but not against the union followership.

This is especially true in the run-up to the next election.

These white ethnics don’t particularly care for Barack Obama.  They think he is an elitist.  They care about his liberal politics.  And they came out to vote big time against him in 2010.

Now, many of those white ethnics were in the trades.  They are the Teamsters and the Carpenters and the Boilermakers.  But some of them are public employees, especially the cops and the firemen.

Walker was smart not to pick a fight with the cops and the firefighters in this go-around.  After all, they supported him during the last election.

Walker and Kasich and Christie have to be smart in how they characterize the union members.

And in this day and age, these union members know that the kinds of tactics used by union organizers is rapidly becoming a relic of the past.

For Republican governors and their GOP allies in Washington, the message should be pretty clear.  You can hate the unions all you like.  But love the union members.