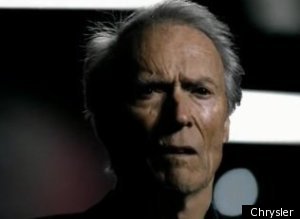 I missed Clint Eastwood’s half time commercial, although I caught Madonna’s big half time Show.

The commercial was corny and so was the show, but both were very effective.

You can’t help but like Clint Eastwood.  I met him once when I worked at the MPAA, and the guy just has a lot of class.

Detroit is not quite back yet.  It is still very dangerous to walk in large parts of the city and it still teeters on bankruptcy.  The suburbs are doing better though, thanks in large part to the revitalization of Detroit’s auto companies.

It didn’t hurt that Toyota had some major problems with its products just as the Big Three started getting more labor concessions.  Timing is everything in life.

Madonna was born in Bay City, Michigan, which is pretty close to Detroit, so I guess there is connection there somewhere.  In our little focus group, the ladies loved her show more than the guys.  It was definitely entertaining, and she is in great shape for a 53-year old (I can’t believe she is 53).

It is kind of odd that Detroit captured the imagination of a Super Bowl held in Indianapolis and played by a team from New York and a team from Boston.   But the American people are rooting for Detroit to come back, just like they root for all underdogs.

It is hard to root for New York as an underdog, but somehow, when it comes to the Super Bowl and the New England Patriots, they are always seen as the scrappy underdogs.  I guess that is because Tom Coughlin, the New York Giants coach is old school, not unlike Walt Kowaklsi from Gran Torino.

The American people have an affection for the Walt Kowalskis of the world, the kind of guys who work hard, play by the rules, and don’t rip off the taxpayers.

Is it half time for America?  Are we going to going out and win the second half, as Clint Eastwood predicts?  I don’t know.  I don’t even know who we are playing against.  But I liked the commercial, no matter how corny it was.