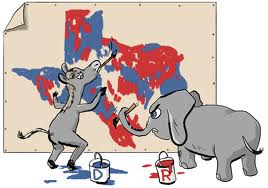 When Elbridge Gerry presided over Massachusetts as its governor in 1812, he signed into a law a redistricting plan that helped benefit his Democratic-Republican Party. One district was said to look like a salamander, and forever after, the term “gerrymandering” – a clever marriage of Gerry and salamander, was used to denote a particularly unfair redistricting process.

Every ten years, politicians fight over control of the size, shape, and makeup of the state and federal legislative maps. More than any other issue, it is redistricting that occupies the attention of lawmakers, more than the debt limit, more than Medicare, and yes, more than Anthony Weiner.

When drawing a map, politicians take into account a few things. First and foremost, they want to protect their own tails. They have to worry about the Justice Department and the Voting Rights Act implications. They are trying to screw their opponents (both opponents of a different party and sometimes, an opponent from the same party). Finally, they want to make certain that they live in the district that they drew for themselves.

State politicians worry first about state legislative districts. After all, as Tip O’Neill put it, all politics is local. They then worry about the federal districts, which is why you often see federal office holders give campaign contributions to folks at the state house. A little insurance money goes a long way.

10 years ago, Republicans did a pretty good job when it came to redistricting. They held their own in California, they gained seats in Pennsylvania and Texas, and they did pretty well in Ohio.

California tried a novel approach to redistricting this time around, taking it out of the hands of politicians and putting into the hands of an independent commission. The result was a map that was hard on incumbents and on Republicans, who could lose 3 to 5 seats in the process.

Illinois, on the other hand, left redistricting in the hands of Mike Madigan, a seasoned political operator and a very partisan Democrat. The Madigan map is especially hard on Republican incumbents, six of whom could lose their seats as a result. It is not necessarily smooth sailing for the Democrats, however, as it will surely be challenged in court.

All is not bad for the GOP, however. They stand to gain at least 4 seats in Texas, perhaps 2 seats in Florida, and other seats throughout the south as the great migration from the Rust Belt to the Bible Belt continues. It is also helpful that Republicans have the governerships in Ohio, Michigan, Wisconsin, Pennsylvania, and New Jersey, which gives them some power to dictate the final maps in those states.

The Justice Department is the unknown variable here. How political will Eric Holder’s team get in enforcing the Voting Rights Act? My guess, given his track record, is that he will get very political. But will that politics influence be used to create more minority districts (which tends to help Republicans) or will it be used to allow the Democrats to use politics to create more Democratic-leaning districts (but fewer black and Hispanic districts).

In any event, the ghost of Elbridge Gerry has returned, as he does every ten years. While the media is focused on the latest Weiner photo, the professional political class is focused on a redistricting process that is only now just beginning in earnest.