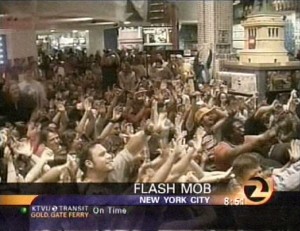 According to Wikipedia, a flash mob is “a group of people who assemble suddenly in a public place, perform an unusual and sometimes seemingly pointless act for a brief time, then disperse, often for the purposes of entertainment and/or satire. Flash mobs are organized via telecommunications, social media, or viral emails. The term, coined in 2003, is generally not applied to events and performances organized for the purposes of politics (such as protests), commercial advertisement, publicity stunts that involve public relation firms, or paid professionals.”

Neither the Obama campaign of 2008 nor the Tea Party movement of 2009 can be characterized as flash mobs under that definition, although they share many of the same characteristics.

Under that definition, the Arab Spring protests also don’t qualify as flash mobs. They had a political point to them.

Flash mobs have overtaken London and other British cities. They don’t seem to have any point to them at all, other than rage and terror.

Flash mobs have also rose suddenly in many American cities. The Wisconsin State Fair was besieged by black flash mobsters whose only goal was to terrorize white citizens. Imagine, for a moment, if white flash mobsters decided to terrorize black citizens. Al Sharpton would be doing his new MSNBC show from wherever the white racists did their deed, and we would never hear the end of it.

There is an odd conspiracy to keep the Milwaukee attacks out of the national limelight. It is as if the media hopes that it all just goes away.

But black flash mobs haven’t just struck in Milwaukee. They have terrorized beach goers in Chicago. They have ransacked stores in Washington D.C. They have struck bars and restaurants in Philadelphia.

Flash mobs used to have a benign feel to them, like world pillow fight day or when a big snow ball fight erupted in D.C.’s Dupont Circle. Now, they have an evilness to them that causes concern for law enforcement.

The London Flash mobsters are anarchists and arsonists. They are mostly young people who have plenty of time on their hands, plenty of anger in their hearts, and absolutely no sense of morality in their heads.

Many of the American flash mobsters share those basic characteristics.

How does one deal with the flash mobsters? I think back to the 1968 Chicago Democratic convention. Mayor Daley (the first Mayor Daley) had a pretty good plan. He let the cops beat the hell out of them. Might not have been very compassionate, but it got the job done.

Here’s another idea. Throw not only the flash mobsters in jail, but also throw their parents in jail and then make them pay for the clean up. Then maybe the parents will do some parenting and stop their kids from being complete jerks.

It would be nice if we could get flash mobs to do something useful for society. How about a flash mob to clean up a park or clear out some rubbish? Or a flash mob to get drug dealers out of a neighborhood or round up truant kids and get them back to school?

Flash mobs aren’t fun anymore. Everybody should go back to work.