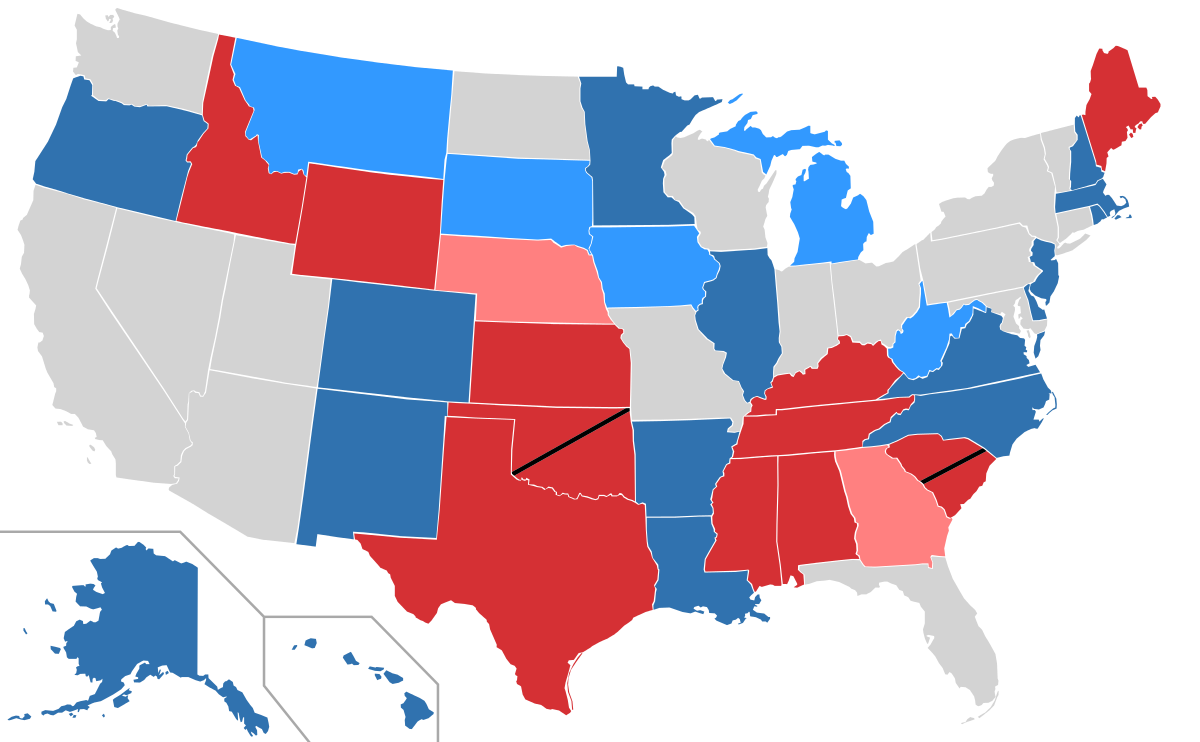 People ask me how I rate the Senate races.  Here is my handy-dandy guide that you can use at home.

For example, Mississippi, Alabama, Georgia and South Carolina have huge African-American populations, but they don’t have big populations of other minorities.  California, New York and Illinois have sizeable populations of every minority, making it more likely for Democrats to construct a winning coalition.

For these purposes, Alaska should be considered part of this group, while Hawaii might as well be assumed to be a Northern State.

Polls:   No matter how much we may hate them, polls provide a useful barometer of how a campaign is doing.  An incumbent who is below 50% in a reelect is usually deemed to be in trouble.  It is pretty unlikely for a challenger to overcome a deficit 10 points or more.    If an incumbent is below fifty percent but has a lead of 20 points, they will usually win a general election.  If an incumbent is below 50 percent, but is up only 8 points, that’s a completely different story.

If you are a challenger, and your opponent is below 50% reelect, give yourself 2 points.  If you are more than 10 points behind, give those 2 points back.

President: An off-year election is usually a referendum on the job performance of the President.   If more than 45% of the American people disapprove of the President, he will likely be a big drag on his colleagues.  If his approval rating is at or near 40, it could be disastrous.

In 2010, 48% of the American people disapproved of Mr. Obama.  The result?  Senate Democrats lost 6 seats.  In 1998, President Clinton’s disapproval rating was 30 percent.  Democrats held their own in that election, breaking even despite the fact that the President had lied under oath about the Monica Lewinsky affair.  In 2006, Republicans lost control of the Senate (and 6 seats) thanks in part to President Bush’s disapproval ratings of 58%.

Given the President’s approval ratings, if you are Republican, give yourself two points.

Personality:  Candidates do matter, by the way.  Heidi Heitkamp was able to beat Rick Berg in North Dakota because she was a better candidate, had a better personality and ran a better campaign.   Hard-work, likeability, personal narrative, and an ability to fundraise all help to win campaigns.  It also doesn’t hurt if a candidate has name recognition that goes beyond that person.  Have the voters heard of you before?   Hillary Clinton was able to win in New York despite the fact that she had never lived there before because voters had heard of her.

This is hard to define and hard to measure.   So, it’s worth 1 point to whoever is judged to have the winningest personality.

Mark Begich vs. Dan Sullivan:  Begich gets 3 for being an incumbent and 1 for the winning personality (his Dad served in the House).   Sullivan is a Republican, so he gets 2 for being in Alaska and 2 for not being in the President’s party.  In the polls, Begich is below fifty and Sullivan is within 10 points.   Sullivan 6, Begich 4.

Mark Pryor vs. Tom Cotton:  Pryor gets 3 for incumbency, and 1 for personality (his Dad served in the Senate).  Cotton gets 4 for being a Republican in Arkansas.   Pryor is below 50 and Cotton is within the margin of error.  Cotton 6, Prior 4.

Mary Landrieu vs. John Cassidy:   Landrieu get 4 (incumbency and personality); Cassidy gets 4 for being a Republican in Louisiana.  She is below 50 and he is within the margin of error.  Cassidy 6, Landrieu 4.

Kay Hagan vs. Thom Tillis:  Hagan gets 3 for incumbency.  Tillis gets 4 for being a Republican in North Carolina.   Hagan is right around 45 percent and Tillis has a slight lead in most polls.  Tillis 6, Hagan 3.

Al Franken vs. Mike McFadden:  Franken gets 3 for an incumbent.  He has downplayed his previous career, so that he won’t get a point for his SNL career.  McFadden gets 2 points for being a Republican, but Franken gets 2 points for being from Minnesota.  Franken is under 50 and McFadden is within 10 points, but those numbers are just on the line.  So let’s split the two points, one for each.   Franken 6, McFadden 5.  Keep an eye on this race.

Jeanne Shaheen vs. Scott Brown:  Shaheen gets 3 for being an incumbent and 2 for being north of the Mason Dixon Line (you can make the case that New Hampshire is a special case, but I won’t here).  Brown is a Republican, so he gets 2.  He also gets style points for being a big personality, so he gets 1 for that.  Brown gets 2 points because Shaheen is below 50 and he is within 10 points.  5 for Shaheen, 5 for Brown.   This is too close to call.

Mark Udall vs. Cory Gardner:  Udall gets 3 for being an incumbent.  Colorado is a swing state, so neither side gets the advantage on demographics.   Gardner is a Republican, so he gets 2 points for that.  Udall comes from a famous family so he gets a point for that.   On polling, Udall is below 50 percent and Gardner is within 10 points, so the Republican gets 2 points for that.   By my count, that’s 4 to 4.  I wouldn’t be comfortable is I were Mr. Udall.

Mitch McConnell Vs. Alison Lundergan Grimes:  McConnell gets 3 for being an incumbent, 2 for being a Republican opposed to Obama and 2 more for being from a southern state.  Grimes gets 2 for keeping McConnell under 50 and is within 10 points.  She gets one for personality (McConnell is not well-beloved there).  7 for McConnell and 3 for Grimes.