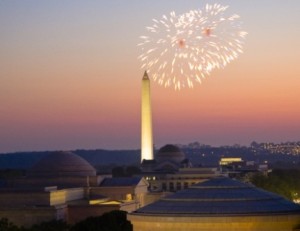 From the roof deck at 101 Constitution.

We had an all-American Fourth of July this year on Capitol Hill.  My brother came in with his wife and kids, so we were excited to soak in some of the patriotic flavor of the holiday.

We started with a local parade on 8th Street, a parade which included the Marine band from the Marine barracks, a fire truck, both a Boy Scouts troop and a Girl Scouts pack, some dogs and their owners, a few activist groups (including an anti-war float) and of course local politicians, although Mayor Fenty was a no-show.

As my sister-in-law put it, there are a lot people with a lot of opinions here.

After the parade, my brother and nephew and I went to the Nationals baseball game.  What could be more patriotic than that?  We stayed long enough to witness Jimmy Smits (who once served as President of the United States – Hollywood version), throw out the first pitch (which I am happy to report sailed into the catcher’s mitt),  and then we all sang the National Anthem.  We then caught a few innings before we leaving because we were literally melting.

We then joined the rest of the gang at the Knights of Columbus pool.  When it is the Fourth of July, and the temperature is climbing close to a hundred degrees, the best option in the middle of the day for the kids and for the adults is the pool.  We spent several hours there, cooked out some burgers, brats and hot dogs, played horse shoes, and generally kept up with the Independence Day traditions.

People at the Knight of Columbus pool have strongly held views.  There is no shortage of politically-charged stickers on the cars in the parking lot.   One lady was trying to get people to sign on to a petition to change Arlington government.  And if you listen in on the chatter, the conversations were mostly likely to be about the deficiencies in the Obama Administration.

My sister-in-law, who lives in Chicago, said again, “there are a lot of people with a lot of opinions out here.”

We drove back into the District around 7 o’clock to catch the fireworks from the top of my office’s roof deck at 101 Constitution.   It is always fascinating to me to see how many people just pull off on the side of major highways, get out of their cars and set up shop to watch the fireworks.  Despite the many warnings that their cars would be towed, thousands of people parked them anyway on either side of the road, got out, put down a blanket and waited in eager anticipation for the show that was sure to come.

We missed most of the traffic, and we got to my office about twenty-five minutes before the show, just enough time for my son and my niece and nephew to get some sorely needed ice cream, which they ate up with mustard.

The fireworks didn’t disappoint.  From our vantage point, they were doubly impressive, because just as the Roman Candles were going up, the sun was going down.

My four-year old watched transfixed, unable to take his eyes off the stunning display.  We were far enough way to not hear the bombs bursting in air, so my little guy wasn’t in any way scared by the display.

From the earliest days of the American republic, fireworks have been a fixture of the Independence Day scene.  While it was the Chinese who first invented fireworks, the American people love them with special intensity.

The Star Spangled Banner, our national anthem, is all about fireworks.   The rockets red-glare, the bombs bursting in air, gave proof through the night, that our flag was still there.

We observe fireworks today, knowing that our freedoms are protected not by the benign displays of roman candles shooting off in the night, but by the real bombs and rockets that have often filled the sky with more deadly affect throughout our national history.

I thought about that as I watched the impressive display on the western horizon.  From our vantage point, you could see far into Virginia, a state whose political leaders once thought they didn’t want to be part of the union.  Mr. Lincoln and Mr. Grant disabused the Virginians of the notion that leaving the union was an option, and the state played host to many tough battles where rockets red-glare and bombs bursting through the air were not an unusual occurrence.

About a hundred thirty five years later, war once again came to the DC region.

I worked at the Capitol at that time when terrorists tried to fly a hijacked plane into the building.  They were stopped by a group of brave Americans who weren’t going to allow them to complete their evil mission.  I remember flying in a helicopter over the Pentagon that September 11th evening, and seeing the flames dance up in the air.  Yeats might have called it a terrible beauty.

We are still engaged in the war that started nearly a decade ago by a bunch of religious fanatics who are offended by the very idea of American freedom.   We don’t spend enough time or emotional energy thanking our troops for the sacrifices they make on our behalf to defend our freedom.

Fireworks aren’t a terrible beauty.  They are simply beautiful, because they signify the triumph of peace over war.  From a distance, the rockets might look the same going up in the air, but they certainly don’t look the same coming down.

People in Washington DC, as in the rest of the country, have a lot of opinions.  Sometimes those opinions don’t match up very well.  But having a strongly held opinion is an important part of democracy.  And looking at the Capitol on the Fourth of July from the roof top of a building right across the street gave me a special appreciation for the work that is done there.

People have a lot of opinions and the best way to resolve those opinions is through representative government.   And we celebrate our democracy with a stunning fireworks display every Independence Day, because we know that while it is hard work to move a country forward democratically, it is far better to celebrate our unity and our independence with fireworks than it is to fight each other with real bombs and real rockets.