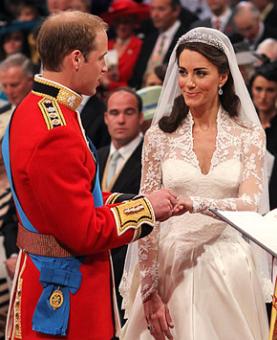 When you come back from vacation, reality crashes into fantasy roughly.

Watching the first kiss between Will and Kate (which I couldn’t escape even though I tried), I saw the fantasy world of the British Monarchy play out before my eyes.

People like the fantasy nature of the Prince and his Princess. It makes it even better that Kate is a commoner. And more power to the Brits. Fantasy is an important part of life. The reality of the situation is that the United Kingdom could probably save some money by stopping all of this monarchy non-sense, but without all the monarchy non-sense, it would be just another declining European power.

This weekend, America is celebrating its own fantasy. The Space Shuttle is taking off for its second-to-last mission. When Jack Kennedy promised that we would walk on the moon, it seemed like a fantasy to most people.

Indeed, some conspiracy theorists believe that we never actually got to the moon, that the moon walk was all a hoax. These are probably the same folks who believe that the President was born in Kenya.

We did walk on the moon though, and then we did some amazing other things in space. Our next mission should be to Mars, although it doesn’t seem like we have the collective will as a people to make that happen any time soon. The reality is we have to pay our Medicare bills. Oh well.

There is a difference between fantasy and delusion. According the dictionary definition, fantasy is the “The creative imagination; unrestrained fancy, or something, such as an invention, that is a creation of the fancy.” Fantasy helps us a live a fuller and more productive life. Delusions don’t.

Focusing only on reality makes it awfully hard to change that reality. That is where fantasy comes in. Without imagining a better world, we will never have one.

I was reading an excerpt from Paul Allen’s new book about the start of Microsoft. What is most fascinating to me is how these guys imagined a world of personal computing and then created the world we now exist in.

Allen and his partner Bill Gates are now super-rich. But I, for one, don’t begrudge them their wealth. If you can make your fantasies become realities and make the world a better place, then you deserve to make a lot of money.

And I don’t begrudge William for marrying Kate Middleton while making millions of people really, really happy in the process. I don’t quite understand it, but more power to them.