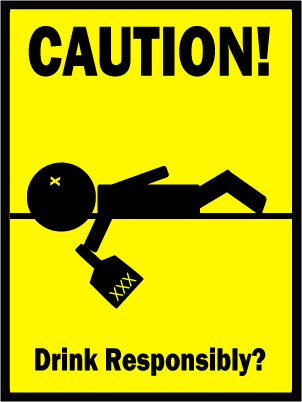 I went back to my Alma Mater this weekend to watch my Marquette Warriors beat the Georgetown Hoyas (okay, so the team goes by the Golden Eagles, but they will always be the Warriors to me).

It was a fun game and I had a great time celebrating after the game.

But two things shocked me as I went back to the campus.

First, I am amazed how young the kids looked.  I was so much older than they were (or so I think, wink, wink).

Second, these kids need to learn how to drink better.

I know, back in the day, I would occasionally get myself over-served.

These kids weren’t over-served.  They were hammered, and hammered in a way that wasn’t funny.  It was frightening.

So, I have some tips for college kids as they drink their way through college:

First, don’t drink on an empty stomach.  You get drunker faster and you pass out quicker.

Second, do shots only in moderation, if at all.  Shots of alcohol might seem funny and it might seem macho, but it gets you drunk faster and you pass out quicker.

Third, drink some water in between the beers.

Fourth, pace yourself, especially if you plan on drinking for the long-term.  There will always be more beer.  Prohibition isn’t going to happen tomorrow.

Fifth, never involve a car when you are drinking.  It used to be the advice of drunk-drinkers to stay five miles above the speed limit and stay in-between the white lines, but that advice doesn’t work anymore.  The penalties are too high, and the evidence is too prevalent that kids can’t drink and drive at any level.

Sixth, stick to beer if you are a college kid.  You guys can’t handle the heavy stuff, so don’t try.

Seventh, a buzz is good, but drunk isn’t very attractive.  Know the difference.

I am pro-drinking.  I like to have a few beers every once in a while.

And I think college kids should be able to have some beers.  It is all an essential part of the college process.

The kids these days need to learn how to drink responsibly if they are going to drink at all.