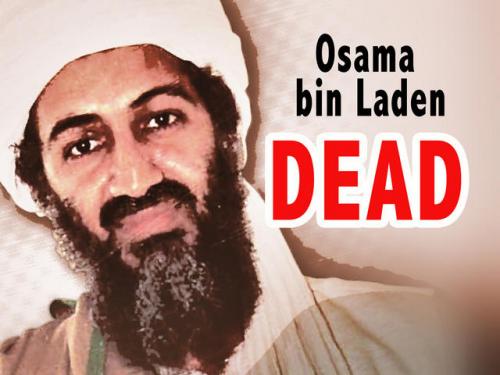 I know exactly how Osama Bin Laden was killed by the Navy Seal team. I used to watch the CBS Series “The Unit”, and they used to knock off terrorists in strange locales fairly regularly.

“The Unit” starred Dennis Haysbert, who memorably played the first, credible black President on the Fox series “24”. Haysbert also does commercials for All State Insurance, as in “your in good hands with All State.”

President Obama, not to be confused with Osama Bin Laden, wants the American people to now believe that we are in good hands with Obama because he killed Osama. A small problem for the President is that the people who believed that he wasn’t born here are probably the same people who won’t believe that Osama died there.

This whole thing has all the elements of a good conspiracy theory. 99 percent sure? Buried at sea? Come on guys. How bout putting his head on a stick? Then everybody would believe you.

Of course, I believe the President and I believed him when he said he was born here. I would rather oppose Mr. Obama on things that are worth fighting on, like bigger government and higher taxes. But that is just me.

The Osama assassination is good for the President in the short-term and good for the country in the long-term. Bin Laden was a bad dude who picked a fight with the wrong country. His vision (to take the world back to the 13th century by using all of the tools of the 21st century) was internally inconsistent and factually fanciful. That it took America this long to finally do away with him is a bit of an embarrassment, but now that he is dead, who is counting?

It turned out he was hiding in a palatial mansion in Pakistan, not in a cave in Afghanistan, which begs two questions: Why do we still give the Paks billions of dollars and why are we still in Afghanistan? Mr. Obama has made the war in Afghanistan the real conflict, but I have to wonder if this charade will continue. We can’t drag this tribal society into the 20th century, so why are we even bothering to drag it into the 21st century?

Each President has his chief nemesis, the enemy for whom he will be ever linked in history. For FDR, it was Hitler. For Kennedy, it was Khrushchev. For Nixon, it was Brezhnev. For the Bushes, it was Saddam Hussein. And for Obama, it is Osama Bin Laden.

Obama deserves some credit for putting down Osama. Not all the credit, but some. This was a good day for America, and it couldn’t have been better scripted by the screenwriters for “The Unit”.