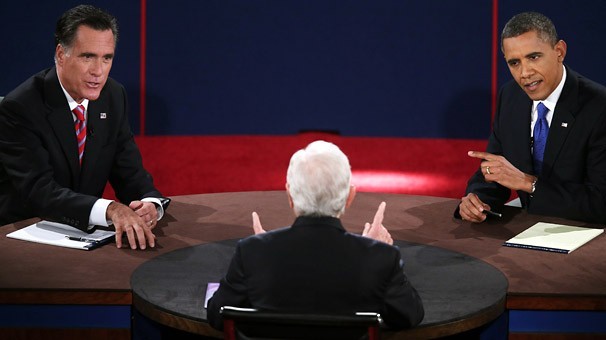 Debates can be tricky, especially when it comes to foreign policy.

Gerald Ford lost his debate with Jimmy Carter when he said that the people of Poland were not being dominated by the Soviet Union.  That certainly wasn’t what the Poles felt, nor the Soviets, nor the American people.

Ronald Reagan won his debate against Jimmy Carter when he proved to the voters that he wasn’t crazy lunatic intent on starting a nuclear war with the same Soviet Union.

Mitt Romney had a Reaganesque performance.  He looked plausibly Presidential.  He didn’t look overly radical.   He made it clear that he had no intention of bombing Iran prematurely.

That being said, this third debate lacked much spark.

The President seemed surly.  He got off cheap-shot after cheap-shot against his competitor, but the cheap-shots didn’t seem to add up to one big blow.

Romney played his own version of ropey-dope.  He took Obama’s blows, and danced away from serious danger.  But he decided not to punch back much, if at all.

When I was in college, my professor, George Reedy (who was Lyndon Johnson’s press secretary), used to teach us about controlling the question.  Who controls the central question of the debate?

The best case of that came with Reagan’s question of Carter, “Are you better off now than you were four years ago?”

There was no real effort to control the question by either candidate, especially in the final statements.

Obama could have asked, “do you want to move forward or do you want go back to the Bush years?”

Neither seemed to be particularly sharp in their final statements, although of the two, Romney was much better.  And neither took a dramatic step to control the central question of the debate.

Obama made the biggest gaffe when he equated the Navy to the horse cavalry and the bayonet (which is still being used by the Marines, by the way).    It seems like the President is intent on ceding Virginia (which builds a lot of ships and is the port of call for many Naval ships) to Mr. Romney.

Romney was fine, although a little too nice to the President in my view.  Obama has made a mess of it in Afghanistan, and I am not certain as to why Mr. Romney didn’t point that our.  Iraq is also a mess, thanks to the President’s policies.  But Mitt decided not to go there.  I wish he would have.

Ron Fournier, the respected National Journal editor, wrote this evening that Obama may have won the debate, but Romney won the debate season.  I think that is right, chiefly because in that first debate, Romney so thoroughly dominated the evening and seemed so Presidential.