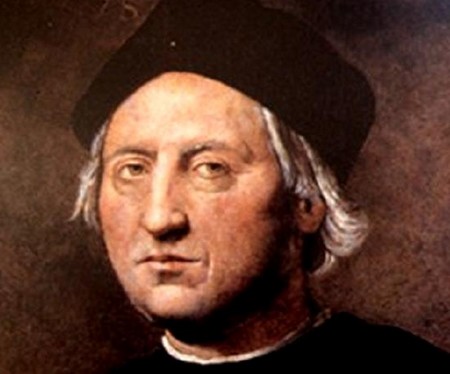 In 1492, Columbus sailed the ocean blue.

That was a long time ago.

It used to be that Christopher Columbus was a big deal in America. In 1892, the worlds fare in Chicago celebrated the 400th anniversary of the Italian sailor's "discovery" of the new world.

These days, we don't even get Columbus day off.

There is still a connection, of course, between the two.

Columbus was born in Italy, petitioned the Spanish monarchs to get money for his trip to the new world, and competed fiercely with Portuguese explorers. He reportedly also spent some time in Ireland.

If I could somehow find a direct connection with the Greeks, we would be all set with the PIGS meme.

Columbus traveled west in hopes of finding a quicker path to to the Indies. What he discovered was that the world was a lot bigger than he initially thought. When he made landfall in the Caribbean, he wasn't in
India at all. He still had half a world to go.

What we are discovering today is that the world is a helluva lot smaller than we initially thought. When the Greeks, the Spanish, the Portuguese and the Irish go bankrupt it greater increases the chances that
we will go bankrupt.

Columbus discovered a brand new world. We are now discovering that the old world has a much bigger impact on our daily lives than we would ever know.

There is no such thing as splendid isolation anymore. Those days are over and have been for a while.

I hope whoever the next President is (and I certainly hope we have a new President) has a global world view that is both sophisticated and principled. This is not time for on the job training, nor is it time for ideological experiments.

In the meantime, we should all doff our caps to Christopher Columbus. If it weren't for him, we might not all be here today.