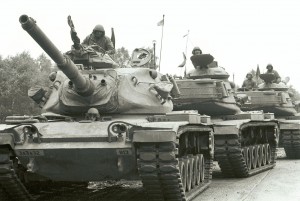 It took awhile, but the Cold War consensus is finally shattering.

The Cold War consensus centered around a basic proposition: America was going to both pay and provide the military might to insure the national security of the free world.

America founded NATO as the alliance to promote that security and Congress paid for a national security establishment that guaranteed the dominance of American troops.

That Cold War consensus obviously started at the conclusion of the Second World War, survived both Korea and Vietnam, teetered a bit during the Carter years, and then came back strong during the Reagan years. After the Soviet Union fell apart, it took a while for the Cold War consensus to gain its bearings and its true raison d’etre.

The war on terror is winding down. We will be out of Iraq before the next election and we may be out of Afghanistan if Congress has anything to say about it.

Secretary Gates just returned from a whirlwind trip, where he basically told the NATO member countries that they had to pay more for their own protection. Many of these countries, especially the Germans, have become both passive and pacifist. They are more than happy to see the Americans take the lead and, oh, by the way, they are against war.

Well, it is all well and good to be against war, and to let the Americans take the lead in offering protection, up and until the point where the Americans, and more specifically, the United States Congress, says, we aren’t paying any more.

We have reached that point.

The United States is broke. The military industrial complex is trying hard to keep Congressional spending on defense on an upward path, but they are on the defensive. The Obama Administration and even Congressional Republicans now say that defense cuts have to be part of any deficit reduction package.

The Republican debate earlier this week hammered home this point. Republicans are now listening more to Ron Paul than they are to Dick Cheney. They are returning back to their familiar philosophical aversion to foreign entanglements and foreign wars.

This is a sea-change. Since Ronald Reagan, Republican orthodoxy had held that we would spend a lot more than necessary on our defense establishment to intimidate our enemies into peace. And George Bush the II made the global war on terror a truly global fight.

This consensus is now ending. Republicans are returning to their more isolationist roots, just as our European partners refuse to pay for their own defense.

The Cold War consensus is collapsing. Who knows what will replace it in the years to come.