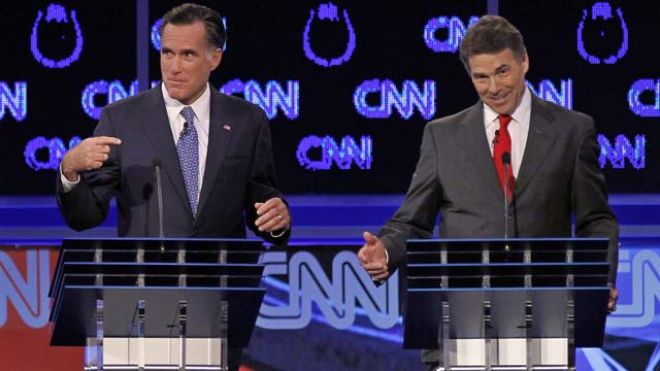 It is generally assumed that Herman Cain will not be the Republican nominee for President. Likewise, it is assumed that Newt Gingrich, Rick Santorum, Ron Paul, Michele Bachmann, Jon Huntsman and Gary Johnson won’t get the nomination either.

The Perry campaign assumes that the dominant conservative wing of the party will never nominate somebody like Mitt Romney.

The Romney campaign assumes that Rick Perry is not ready for prime time and that his Texas shtick won’t translate beyond the Lone Star State.

Neither the Perry nor the Romney campaign are completely sold on their assumptions though, which is why they are slugging away at each other, ignoring the rest of the field, especially the current front-running, Mr. Cain.

Perry and Romney are the only two candidates who have the money to last them past January. If Santorum wins Iowa, perhaps his campaign might breathe in some new life, but I wouldn’t bank on it.

Perry is running the same campaign that he ran against Kay Bailey Hutchinson, the Senator from Texas and his chief rival in his re-election bid. The whole Republican establishment supported Hutchinson, but Perry ran far to her right, nodded to the secessionist wing of the party, condemned her work as an appropriator, called her a Washington insider, and basically bludgeoned her with sharp attacks on her conservative bone fides.

Perry’s theory is that he can take what was successful in Texas, and take in on the road. This strategy ran into a few bumps early on. He got hammered from Republican rivals who saw him as a threat to their own campaign futures on issues as diverse as the HPV virus and his position on giving illegal aliens tuition tax breaks. That forced him to go farther to the right than he initially anticipated, and now he has to do things like give a nod to the birthers and come up with a dramatic tax reform plan that will probably complicate his general election strategy should he win the nomination.

But Perry isn’t worried about the general election yet. You can’t say the same about Mitt Romney.

Romney seems overly worried about his eventual campaign against Barack Obama. He offers nuanced answers to almost every question. He defended the TARP program. He refused to weigh in on behalf of John Kasich’s fight against the unions. He keeps talking about middle income voters. He talks glowingly about legal immigration. All of this should help in a battle against the President. But I don’t see how it helps with the conservative base of the party.

Romney’s attack on Perry on the immigration issue successfully knocked the Texas governor off of his stride but it hasn’t yet knocked him out of the race. I think it is far too early to predict the eventual outcome of this two-person race, but if I were the Romney campaign, I wouldn’t count my chickens.

Romney has to reassure the GOP base that he understands their chief concerns and that he will remain faithful to the conservative cause. Many in the base would rather see a principled conservative lose than see a mealy-mouthed moderate win and then betray them. That certainly is the Perry theory.

In my humble opinion, Romney needs to take a dramatic step to reassure that reluctant base. If I were advising him, I would tell him to stop running a premature general election (think Hillary Clinton) and start feeding some red meat to the red-meat crowd. Start talking more about the Constitution, about the sanctity of life, and the need for pro-growth policies. And I would offer those voters a contract that lays out what he promises to do and more importantly, what he promises not to do if he is elected President.