Bryan to Run For President As a Tea-Party Republican 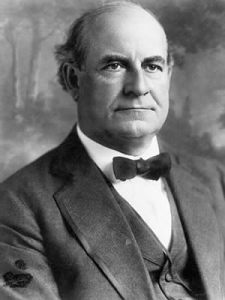 (Dayton, Tennessee) William Jennings Bryan, who last ran for President in the 1908 election, announced that he was going to run for President as a Tea-Party Republican in 2012.

Bryan promises to run against the TARP bailout, New York industrialists, government spending, the Federal Reserve, evolution, and in favor of policies that help the “common” man.

Asked why he was running as a Republican instead of as a Democrat – where three times he won that party’s nomination for President in 1896, 1904 and again in 1908, Bryan said:  “Destiny is no matter of chance. It is a matter of choice: It is not a thing to be waited for; it is a thing to be achieved.

Sarah Palin, when asked about Bryan’s run, looked on in incomprehension, as if she had never heard of “The Great Commoner”.  Mike Huckabee, whose platform closely resembles Bryan’s scoffed when told of the run:  “He can’t run for President.  He’s been dead for 80 years.”

The Bryan campaign is reportedly working out the details to overcome that one minor issue.

Bryan is expected to appeal to conservatives from the more rural parts of America.  His appeal in bigger, urban areas will be tempered by this kind of rhetoric:

“Burn down your cities and leave our farms, and your cities will spring up again as if by magic; but destroy our farms and the grass will grow in the streets of every city in the country.”

Bryan is expected to run a campaign that should appeal to religious conservatives and against education reform.   “The parents have a right to say that no teacher paid by their money shall rob their children of faith in God and send them back to their home…If we have to give up either religion or education, we should give up education”

Reminded by polls that more than half of the American people do not believe in evolution, Bryan is expected to hit hard on that issue:  “There is no more reason to believe that man descended from some inferior animal than there is to believe that a stately mansion has descended from a small cottage…All the ills from which America suffers can be traced to the teaching of evolution…God may be a matter of indifference to the evolutionists, and a life beyond may have no charm for them, but the mass of mankind will continue to worship their creator and continue to find comfort in the promise of their Savior that he has gone to prepare a place for them.”

Calling for more transparency in government, Bryan reiterated his position on open governance:   “The government being the people's business, it necessarily follows that its operations should be at all times open to the public view. Publicity is therefore as essential to honest administration as freedom of speech is to representative government. "Equal rights to all and special privileges to none" is the maxim which should control in all departments of government.”

Reflecting the “Don’t Tread on Me” attitude of the Tea Party movement, Bryan also said:   “The chief duty of governments, in so far as they are coercive, is to restrain those who would interfere with the inalienable rights of the individual, among which are the right to life, the right to liberty, the right to the pursuit of happiness and the right to worship God according to the dictates of one's conscience.”

In talking about the TARP bailout and the actions of the Federal Reserve, Bryan paraphrased from his famous speech to the 1896 Democratic convention:   “You shall not press down upon the brow of labor this crown of thorns. You shall not crucify mankind upon a cross of gold.”

Bryan, an isolationist and an anti-imperialist is expected to echo Ron Paul’s views of our international presence:  “The nation is of age and it can do what it pleases; it can spurn the traditions of the past; it can repudiate the principles upon which the nation rests; it can employ force instead of reason; it can substitute might for right; it can conquer weaker people; it can exploit their lands, appropriate their property and kill their people; but it cannot repeal the moral law or escape the punishment decreed for the violation of human rights.”

It is unclear if Bryan, who was known to give four hour speeches back at the turn of the last century, can adapt to the new world of instant communication.  Sarah Palin, for example, has mastered Twitter and art of saying a lot in 140 characters or less.  By Bryan is unbowed.  “Eloquent speech is not from lip to ear, but from heart to heart.”