The Irish know something about walls and borders.

In Belfast, they still have scattered throughout the city, ironically-named peace walls that separate Nationalists from Unionists to keep the two communities from killing one another.

But as you drive across the border that separates the Irish Republic from Northern Ireland, the only thing you notice today is a change in your cellphone service.

When I was in college in Ireland in the mid-1980s, we took a trip to the North and the crossing was far less seamless. British soldiers came aboard our school bus, confiscated our cameras and asked lots of questions.

It will be 20 years this December since the Good Friday accords first started being implemented, and while much progress has been made, many questions still are left unanswered. Perhaps it is better that way.

Peace is easier to keep when the economy is growing and people are working. Idle hands are the devil’s workshop, as they say. But in Northern Ireland, as in the rest of the world, it’s not just about jobs. It’s about finding ways to forgive and forget and then move to embrace the future.

For the first time in about seven decades, a British Open was held in Ulster, a sign that things are moving forward, ever so slowly. 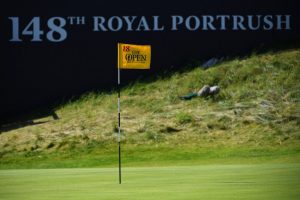 None of the Irish golfers are immune from the troubles that played such a prominent role in keeping the Open out of the North. Irishman Shane Lowry, who won the golf tournament, comes from a prominent family of Gaelic footballers in the Republic. His caddy, Bo Martin, grew up in Belfast. Darren Clarke, a fellow British Open winner, once worked at a pub that was targeted by an IRA bomb. Rory McIlroy, the crowd favorite, grew up Catholic in a Protestant neighborhood. His Uncle Jimmy was killed by Protestant henchmen in 1971.

Graeme McDowell, who actually was born in Portrush, where the tournament was held, was raised Protestant but has plenty of Catholics in his family history. When asked whether he identifies as Irish or British, he said, quite diplomatically, “You are always going to upset somebody, so why not sit on the fence?”

In sports, you can sit on the fence when it comes to political questions. And maybe that’s for the best. Because in sports, it’s not about the rhetoric. It’s about the results.

Over the weekend, Mariano Rivera spoke eloquently in heavily accented English during a ceremony celebrating his induction into the Baseball Hall of Fame. He is the only player in history to be unanimously voted into the Hall, a stunning achievement if you think of the many folks who have played the game.

Rivera’s contributions to baseball are endless, but his example serves another important purpose. Immigrants in America play an essential role in our society and ought to be celebrated, not vilified.

In America, as in Ireland, sports does best when it leads by example. Fans don’t want to be lectured or virtue-signaled by professional athletes, but they don’t mind being inspired by their superior performances. And it is through those superior performances that we all gain a better appreciation for the basic humanity of our fellow humans.

In Northern Ireland, there are proposals to replace the peace walls in Belfast with sports fields. I have always thought that billionaires who are concerned about the future of America would be better served spending their money on ballfields rather than on political organizations and nonprofits.

Ever since President Trump got himself elected to the White House, I don’t spend a lot of time watching news talk shows on cable. I don’t find the commentary to be particularly interesting or informative.

Instead, I watch the Golf Channel. The politics are much more interesting.