Boehner Is In Fine Shape 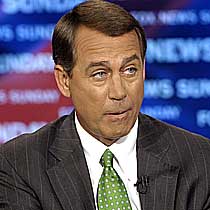 John Boehner is doing an exceptional job as Speaker under extraordinarily tough times.

When I first started working in Congress, Tom Foley had just taken over from Jim Wright as Speaker of the House.  Unlike the dictatorial Wright, Foley ran a decentralized process that gave too much power to Committee barons like Dan Rostenkowski, Jack Brooks and John Dingell.

Foley could never quite get the Chairmen to work together enough to overcome their jurisdictional squabbles, and Democrats faltered under the House Bank scandal, the Post Office debacle and a series of other damaging revelations about a Congress that was out of control.

When Newt Gingrich came to the Speaker’s Office, he leap-frogged over the gentlemanly Bob Michel (my former boss) who unfortunately announced his retirement before he could see the promised land of a Republican majority.  Gingrich learned the lessons of the ineffective Foley, centralized power in his chambers, and bull-rushed an ambitious Contract with America legislative agenda.  Along the way, Gingrich alienated some of the new Freshmen, his committee Chairmen, and some key members of the leadership, so much so that a few of them launched a failed coup against the embattled Speaker.

Gingrich was weakened by an ethics scandal, an aggressive ad campaign launched by the Clinton campaign, and some of his own legislative missteps.   Gingrich eventually stepped aside when his all-in political strategy to make Clinton’s sexual dalliance the issue of the 1998 campaign backfired and Republicans lost seats.

Under a bizarre set of circumstances, Denny Hastert ascended to the throne after Gingrich resigned, and was left to pick up the pieces in the aftermath of a messy impeachment process.  Hastert (who I also worked for), promised regular order in the legislative process and less drama in the Speaker’s office.

Hastert had to deal not only with Bill Clinton in his last two years.  He also had to manage the egos of his two lieutenants, Dick Armey and Tom DeLay, both of whom believed that they should be the ones running the show.  Armey later left to become a lobbyist and then one of the founders of the Tea Party (or at least so he claims), while DeLay (who I also worked for), did his best to solidify his political base and promote his social conservative agenda before he had to resign his post in disgrace.

Hastert ended up losing his majority when the American people soured on George Bush, the Iraq War, a slowing economy, and general disenchantment.  The Mark Foley scandal put the final nail in the coffin and Nancy Pelosi ended up replacing Hastert.

That bit of history brings us to John Boehner.

Unlike many of his colleagues in the House leadership, Boehner remembers what happened to Tom Foley and Newt Gingrich, because he served under both of them.  Boehner also knows well the contrasting styles of Pelosi and Hastert.

Boehner, like Hastert, and unlike Pelosi and Gingrich, aims to be the Speaker of the whole House, and not just a glorified majority leader.  His tone in letting the House work its will at the beginning of this Congress was Rayburnesque.  But Boehner also understands that he can’t become a protest Speaker – a la Pelosi -- and let the House work its will against the interests of his majority.

If he made any mistake in the negotiations on the so-called Grand Bargain, it was in getting out ahead of both his caucus and his majority leader.   But his instincts to get something done for the good of the country were good.  The country needs to take a dramatic step in the right direction on deficit reduction and Republicans have to stop defending the status quo of a tax code that is in too many ways completely indefensible.

Boehner has his critics in the Republican Conference, but many of these critics are back-seat drivers, others are ideological warriors who have no interest in making the system work, while others simply have no real legislative experience and don’t know what they are talking about.

Among most of his rank-and-file colleagues, Boehner is doing a good job.  When these folks go home, they don’t have to face questions about Boehner’s ethics (unlike Jim Wright or Newt Gingrich).  He hasn’t said anything embarrassing that these members have to defend.  And by allowing for an open-process, he has given them a chance to offer amendments and be part of the game.

I find it hard to believe that even if some critics have a beef with Boehner on how the final debt limit solution will look (and surely some will), that they will have the courage or the inclination to try to oust him.  Boehner has done a good job representing the whole House in these very trying times, and as far as I can tell, his job is secure.