Beware of Patriotism Done on the Cheap 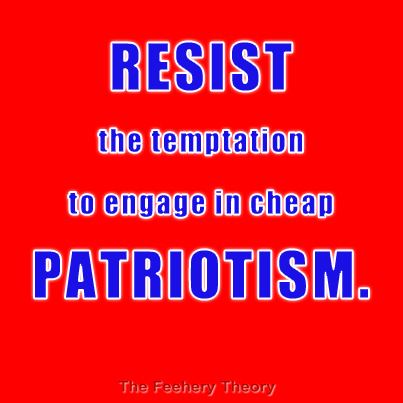 “The growing cultural gap between American society and our military is dangerous and unhealthy. The sense that war belongs exclusively to the soldiers and generals may be one of the most destructive expressions of this gap. Both sides are to blame. I know many soldiers who don’t want to be called heroes — a grotesquely misused word — or told that they did their duty; some don’t want to be thanked. Soldiers know all too well how much killing — mostly of civilians — goes on in war. Congratulations make them feel that people back home have no idea what happens when a human body encounters the machinery of war.”

I have been thinking a lot about war, patriotism and how we express support for our troops.  I suppose that is only fitting, being this was Memorial Day weekend, which is not only the traditional start of summer, but also the holiday set aside to remember the sacrifices of those who paid the ultimate price in fighting foreign wars.

I stirred up a bit of a fuss on social media on the subject over the weekend on this very subject.  On my way to visit my dad at the Veteran’s Home in Manteno, Illinois, I made a crack about the boarding policies of United Airlines on Facebook.

I said something to the effect that I thought it was ridiculous that perfectly healthy active duty soldiers (and sailors and marines, and airmen, but not the CIA or the police) were given early boarding privileges, while families with small children were not given some extra time to get their kids secured on the plane with them before the hoards descended.

It was comment born out of frustration.  Our airlines used to take special care of families with small kids.  They don’t do that anymore.

My comments were not well received.  Most of my friends called me insensitive.  One person called me disgusting (I de-friended him immediately.  I have a policy of de-friending friends who call me disgusting).   The general theme of the comments was that this is the least that we can do for our military, that they deserve this little bit of respect and that I was incredibly unpatriotic for even questioning this small gesture by a Big Airline that does its level best to squeeze every single dime from their customers.

Only a couple of guys -- both who actually served in the military -- offered supportive words.  One admitted that he found it a tad bit embarrassing to be given that privilege (although he was happy to take it, I am sure), and the other said that all things being equal, he would like it more if they gave him free beer in First Class.

We live in a post-Vietnam world where neither Republicans nor Democrats nor Independents want to be in any way disrespectful of our military and their service to our country.

But unlike 50 years ago, when we had the draft, we live in a society where only a very small percentage of Americans have any real military experience.

You can see that especially reflected in Congress.   There aren’t any Bob Doles or Bob Michels around in the leadership of either the House or Senate, Congressional leaders who saw the worst of war and lived to understand the differences between the political process and the violence of armed conflict.

For most Americans these days, our military “heroes” are mythic creatures to be honored and deified.  Yes, we all appreciate their service, but we also have pretty much no idea what they did or why they did it.

And for most Americans, that really isn’t much of their concern.

My dad served in the Army in the closing days of the Korean War where he gained an appreciation for military life, both the good and the bad.  He learned how to make his bed so that a quarter could bounce of the sheets.   Better yet, he knew that the Army (and by extension, the Navy and the Marines) was made up of all kinds of men.  He knew that some were good men and some were not so good.  Some were annoying, some were stupid, some smelled, some were cowards, some were good guys that had your back in a bar fight or in a fox hole.   Not everybody was a hero.

When America had the draft, Americans had a healthy appreciation of what the military could and couldn’t do.  They didn’t throw the hero label around carelessly.  Not everybody who served was a hero.   And most of them had no intention of dying in the defense of freedom.  That was not what they signed up for.

War is romanticized by those who don’t fight it.  And right now, in America, we spend a lot of time romanticizing about those folks who are in the military.

Al Qaeda is not the biggest threat to our freedom.  Nor is Iran, nor the Chinese, nor the Russians.

Fear leads us to give the government the power to infiltrate every aspect of our lives to make us feel more secure.  Fear makes it hard for politicians to say no to a security apparatus that finds the First Amendment to be a nuisance.  Fear tips the balance away from freedom.

The military can’t do anything to ease our fears on the domestic front, especially in this war on terror.  It is not abundantly clear that the billions we have spent bringing some semblance of civilization to Iraq and Afghanistan has helped dispel the fear that too much of us feel about the next terrorist attack.

The military has a job to do and they do a pretty good job of it.  But it is not a flawless institution.  Men (and women) in the military make mistakes.  At times, they make bad judgments.  The Pentagon is a huge, mind-numbing bureaucracy.  There are a lot of generals there who excel at bureaucracy, but not much else.   There are a lot of privates who couldn’t find a job anywhere else in the world, and that is why they are in the Army.

We should resist the temptation to engage in cheap patriotism.

If we want to support our troops, we should do a couple things.

It is altogether fitting and proper to pay tribute to all who paid the ultimate price to protect our freedoms, and I fully support those efforts.  But beware of patriotism done on the cheap.  We all have a role to play in protecting our liberties and the essential essence of freedom in our nation, and it should go beyond simply letting active duty personnel board a United Airlines flight first.