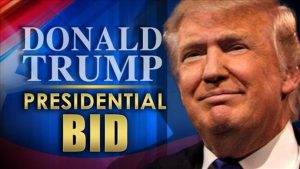 That’s where Ladbrokes set the odds when Donald Trump announced three years ago that he was running for president.

I guarantee that nobody in either political establishment took that bet from the London bookies when the New York billionaire descended down that escalator with wife Melania, announcing that he was going to stop illegal immigration, rip up unfair trade deals and make America great again.

He was a joke, a laughingstock, an afterthought. He had no chance against the powerful Bush family or Sen. Marco Rubio (Fla.), the great hope of the Republican consultant class.

In full disclosure, I was one of those doubting Thomases, a prisoner of my own set of expectations. I saw a path forward for John Kasich, the talkative Ohio governor, but not for The Donald. Trump didn’t have the experience or the know-how or the backing of anybody who mattered in politics.

Many of those folks voted for Barack Obama in 2008 because he had little political experience. That didn’t work because at the end of the day, Obama defended globalization even more than the Bush family did, perhaps adding a bit of international socialism into the mix to please his left-wing friends.

And so those voters went with somebody who had less than little political experience. And so now, we have who we have as president.

The amazing thing about Trump is how consistent he has been on his policy goals. He promised that he would change the status quo on immigration and on trade, and guess what we are talking about this week in Washington.

The House will take up legislation to fix our broken immigration system this week. The president will meet with the Republican Conference on Tuesday night to see if they can come up with something that everybody can agree on.

That doesn’t seem very likely. Many of the hard liners don’t want to vote for anything that could be perceived by anybody to give amnesty to any illegal immigrant, “Dreamer” or not. Their inflexibility makes it awfully difficult to get anything out of the House, let alone the Senate.

Of course, the president has all the authority he needs to enforce the laws that are already on the books. The Democrats and their aligned outside groups might not like those laws, and they didn’t like it when former President Obama enforced them, but the law is the law. And if people continue to bring their kids with them as they try to sneak into this country illegally, this president and his team won’t hesitate to do what they have to do to enforce the law the way they see fit.

The media, the pundits and the establishment find this all to be horrible, and from a public relations perspective, it’s not the finest hour for this White House. But to the voters who wanted something done about illegal immigration, it’s a further example of a president who does what he says and says what he does.

House Republicans are more sympathetic to Trump on immigration than on trade. Free trade has been a mantra for free-market conservatives for decades, and while there has been significant slippage over the years among some Republicans during that time, the prevailing view has reflected more the investing class than the working class.

But on trade, the president holds a lot of cards, more than the congressional Republicans who might not want to see a trade war with our friends in the Great White North. And who knows? This might all be a bunch of negotiating bluster from Trump.

But I wouldn’t bet on it. The president seems to be fixated on keeping his promises to those voters who bet on him when nobody else thought he had a chance, no matter how good or bad those promises might be.