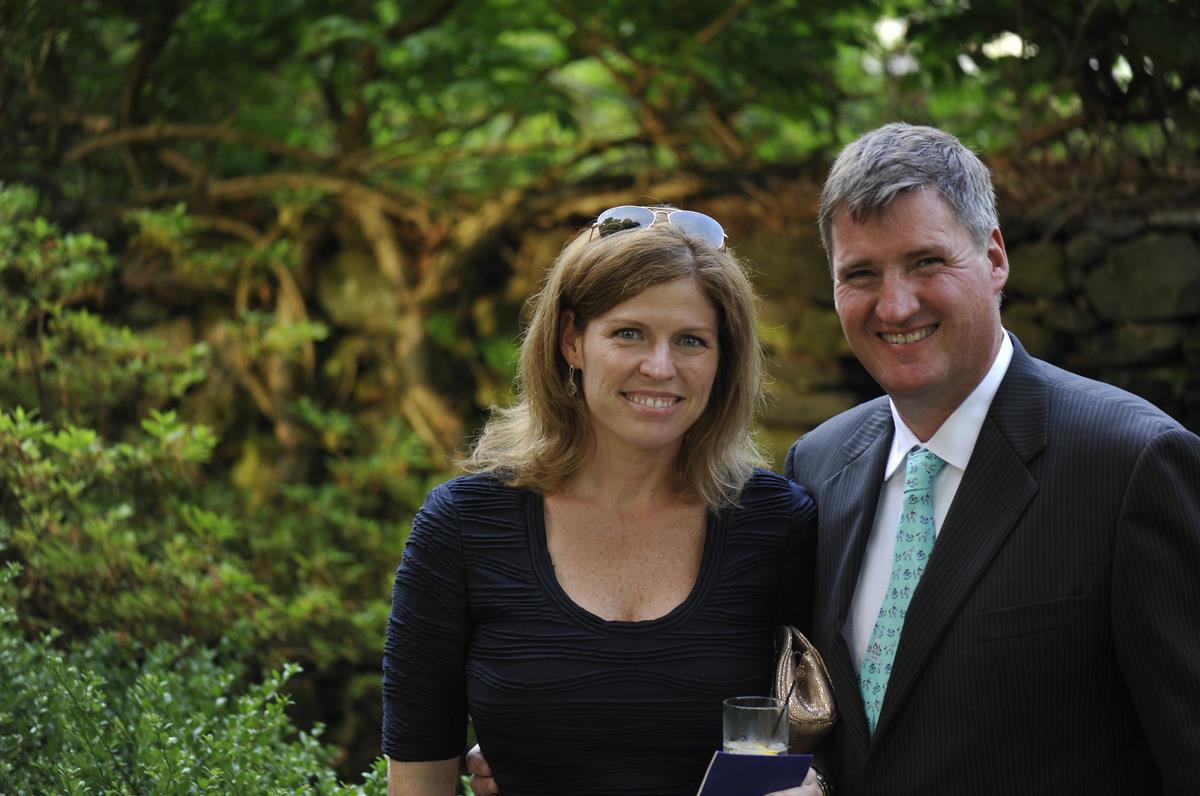 Last night, I wore my Thanksgiving Turkey Trot shirt from 2002.

I got that shirt on the day I proposed to my wife.

It was a 10K and I had set it up to ask her to marry me as I was crossing the finish line.  Her brother, Sean, was in on the secret, and I lugged the ring with me the whole race.

Eileen (Sean’s wife), had champagne at the finish line, and all was good in the November chill.

It’s probably a cliché, but marriage is kind of like a race.  Sometimes the start can be kind of rough as you work out the kinks, but eventually you hit your stride.

We got married in Ireland. A plan we plotted out in Sean and Eileen’s house.

There were some skeptics about the Ireland plan.  My Uncle Bob doesn’t fly across large bodies of water, so he was out, but he agreed to pay for some of my cousins, and they had a great time, so it kind of worked out.

Our wedding was the best wedding I have ever been to.  I am not kidding and I am not bragging.  It was simply the best day in my life.  And I think anybody who was at the wedding would agree that this one was special.

At four in the morning, my dad said to me, in appreciative tones, that he couldn’t believe that we pulled it off.

He had just had a conversation with the former manager of the Dubliner bar, who had made the trip over.  It was one of those conversations that you can only have at an Irish wedding.  My dad said that he had no idea what Colm was talking about.

The wedding was held outside in a tent and as my father and Colm were talking, Colm fell back into the tent and sprang right back up, not missing a beat.

It was that kind of wedding.  We had a band and then a DJ (which Kerry thought was a bit of overkill, but it worked out).  Somewhere in the 2 am hour, the band taught the crowd how to do an Irish line dance (or was it the DJ?).   I got to sing my standard hit “House of the Rising Sun” in Karaoke style.   My wife was very proud.  Well, not really, but she was a good sport about it.

Kerry is the kind of Irish-American woman who will tell you, in no uncertain terms, to “wipe your muddy boots.”   For those who like “The Quiet Man,” you will get the reference.

She is perfect for me.

The first time I saw her, she took my breath away.  She was way out of my league.

The second time I saw her, I introduced myself.  It was St. Patrick’s Day.

Kerry’s response?  She said nothing.  Absolutely nothing in response.

She says she doesn’t remember it.  But I do.

The third time I met her, I was introduced to her by our mutual friend Gayle.

We had a great conversation.  We both talked about being Irish and possibly moving to Chicago.  She was originally from Chicago and I was from Chicago, and wouldn’t it be great if we could both leave this town and move to Chicago?

We seemed to hit it off.

I ran into Gayle five months later, and I asked her how Kerry was doing and she said, “Why don’t you call her?”

And so I did.  And I met her at a going away party for her.  She was leaving her job in the Senate, and the party was at the Dubliner (who knew?), and after the party, I asked her out.

We went out to dinner in Georgetown and danced the night away, which is pretty funny, because Kerry is not much of a dancer.  She does a great Elaine dance, but dancing is not her deal.  She was also training for a marathon, and our date kind of screwed up that plan.

For our second date, I took her to Mass at St. Mary’s in Old Town and then to dinner.

I have no earthly idea why we went to Mass.  I guess I was trying to impress her.  During the Mass, a twenty four year old Priest lectured everybody in the crowd how if you weren’t married, you were probably living in sin.

We started dating and I wish I could say it was all smooth sailing.

It wasn’t.   Kerry probably could sense that I wanted to get married, and I probably put way too much pressure on the situation.

She was “no box of rice” to be pulled off the shelf.  She was a person and she didn’t want to be pressured, as she told me we were done at a dinner at a restaurant right off of Lincoln Park on the Hill.

I didn’t take it well.  The weekend after she dumped me, I went to St Patrick’s Cathedral in New York, and I wondered how it was all going to work out.

It wasn’t going to work out if I was going to continue to be schmuck.  And I came up with a plan to get myself together, get myself in shape, and not be a schmuck anymore.

Seven months later, after the 9/11 attacks, we somehow connected again.

And eventually we got back together.

A year later, in the same restaurant where we broke up, Kerry explained to me the four-season rule.  If you have been dating for four seasons, that’s plenty of time to make a decision about getting hitched.

In other words, let’s get this thing moving.

And that’s when I hatched to plan to get engaged at the Turkey Trot.

After the Turkey Trot, we hatched the plan to get married in Ireland.

Jack came about two years after we said “I do” in St. Mary’s Cathedral.

Molly came a year ago.

Our kids are hilarious.

Jack is full-impact.  And by full, I mean full.  He can be exhausting, but in a great way.

Molly is just one, but you can already tell that she is going to mild-mannered and nice.  Just like me.

I barely remember the person I was 10 years ago.

Now I am a husband and a father.

I have become the man I am supposed to be.

And that’s all because of Kerry.

She was way out of my league, but now we are on the same team.

And that’s kind of cool.

We have hit our stride.